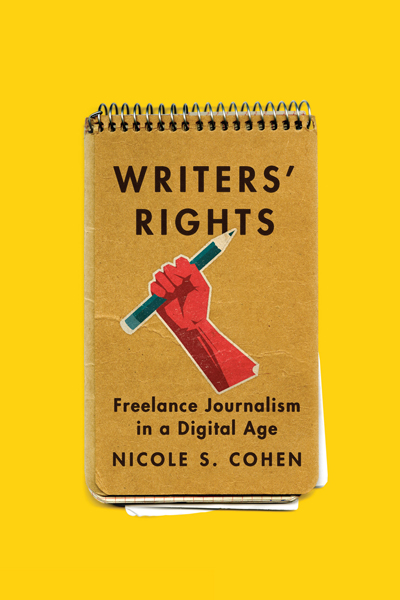 “Cohen has crafted a surprisingly hopeful, decidedly thorough treatise on shifting power structures and business ethics in a field that’s constantly reinventing itself”

As media industries undergo rapid change, the conditions of media work are shifting just as quickly, with an explosion in the number of journalists working as freelancers. Although commentary frequently lauds freelancers as ideal workers for the information age – adaptable, multi-skilled, and entrepreneurial – Nicole Cohen argues that freelance media work is increasingly precarious, marked by declining incomes, loss of control over one’s work, intense workloads, long hours, and limited access to labour and social protections.

Writers’ Rights provides context for freelancers’ struggles and identifies the points of contention between journalists and big business. Through interviews and a survey of freelancers, Cohen highlights the paradoxes of freelancing, which can be simultaneously precarious and satisfying, risky and rewarding. She documents the transformation of freelancing from a way for journalists to resist salaried labour in pursuit of autonomy into a strategy for media firms to intensify exploitation of freelance writers’ labour power, and presents case studies of freelancers’ efforts to collectively transform their conditions.

A groundbreaking and timely intervention into debates about the future of journalism, organizing precariously employed workers, and the transformation of media work in the digital age, Writers’ Rights makes clear what is at stake for journalism’s democratic role when the costs and risks of its production are offloaded onto individuals.

Winner of the 2017 Gertrude J. Robinson Book Prize from the Canadian Communication Association.

“Writer’s Rights will establish Cohen as the leading authority on freelance journalism for many years to come”
— Ursula Huws, University of Hertfordshire

The book is available from McGill-Queen’s University Press and Amazon.